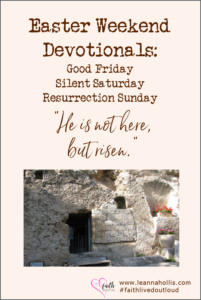 Our Easter Weekend Devotionals include scripture, meditations, and directed introspection for Good Friday, Silent Saturday, and Resurrection Sunday. Use them to draw closer to our Lord and experience the power, mercy, and grace of the greatest gift ever given: redemption through the blood of Jesus. 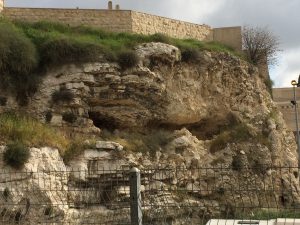 The crowds cheered and shouted Hosanna. Palm branches lined the path. The King for whom they waited finally arrived. Their shouts echoed through the streets of Jerusalem. They were the first voices of the week, but they weren’t the last. (John 12:12-13)

Jesus heard so many voices that week. Praise. Love. Arguments. Pride. Betrayal. Condemnation. Denial. Fear. Sorrow. Those who loved Him most failed Him in scandalous ways. Their voices were the worst of the lot. “How much will you pay me?” “Give me the best seat.” “I never knew Him.”

If we’d been there, what would our voices say? Would we beg for the best seat next to Him or let fear drive us to deny Him? Might we join the crowd in condemnation and cries to crucify Him? Yes. Any of that. Possibly all of it.

We were at fault and to blame. We all sinned, all fell short of His glory, His standard, and His love. (Romans 3:23) The problem isn’t an ancient “them,” it’s us. Every single one of us is a sinner and, together, we drove Him to the cross.

God had two choices in response to our mountain of sin – annihilate us or redeem us for all eternity. We deserved judgment and condemnation because of our sin. He chose mercy and grace instead. (Romans 8:23)

Good Friday is good because of the redemption bought with the holy blood that was spilled. There was nothing good about the way it was purchased. The pain, suffering, grief, darkness, and torment were vital in the total defeat of sin and death.

For today let’s use these Easter weekend devotionals to help us embrace His pain in order to understand, as much as humanly possible, the price of our salvation. It wasn’t bought by a bent knee at an altar or by a heartfelt confession. Our freedom was purchased with blood, agony, death, and tears from the One who loved us most.

If memory served us, we’d be reminded of His price every time we’re tempted to sin, to betray Him with our choices, to indulge our will instead of His. Today, let’s allow memory to do its work and flood us with the dreadful depths of God’s love.

Soak in the sorrow. Ponder the pain. Hold the hope at bay for just a bit and linger in the loss long enough to remember the price love paid. Sunday’s sweetness comes only after the sorrow of today. Stay here for a while and let the truth of that horrific Friday drive us to our knees and cleanse our hearts again.

“Greater love has no one than this, that one lay down his life for his friends.” John 15:13 nasb 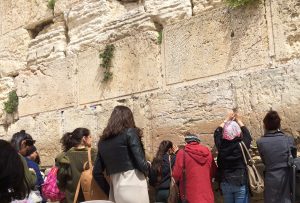 The Saturday When Silence Reigned

Jesus’ body was removed from the cross and transferred to the borrowed tomb of Joseph of Arimathea shortly after his death. Because the Sabbath was imminent, Joseph and Nicodemus quickly wrapped His body with seventy-five pounds of spices and strips of linen.

Myrrh, the spice used to prepare His body for burial is the resin of a Commiphora tree. A “wound” (or piercing) is inflicted on the tree, which “bleeds” myrrh resin. This resin can be used as an antiseptic and for the healing of wounds, just as the precious blood of Jesus, spilled on the cross, cleanses and heals the wounds sin has inflicted. (You can read more here.)

Saturday, the Sabbath, was a day of rest, waiting,  silence. No work was allowed. Scripture tells us very little about this day, but I imagine the disciples huddled together, likely in shock, grief, and fear.

No one expected Him to die, much less endure the torture and horror of crucifixion. The disciples reeled from the events of the night before and probably feared for their own lives. Would they be next? No one knew.

It was the question in everyone’s mind. Everything depended on the coming day. Three days, Jesus said. Would He rise? Was it possible? Yes, of course, it was, they must’ve reminded each other. Jesus raised Lazarus less than a week before. He could raise Himself, or so they hoped.

Surely they remembered His words, but maybe not. Maybe it felt as if the God-silence of four centuries, broken by a brief interlude of three beautiful years, had begun again.

How could they live without Jesus? Could they return to boats and nets rather than fishing for men?

Silence reigned and earth waited, as our Savior waged war with darkness. Hope hung in the balance. Redemption. Eternity. It all depended on Jesus’ victory in the unseen war He waged.

It’s easy to forget the time before we knew Jesus when His voice was seemingly silent. For most people in our dark and perishing world, their experience is one continual Silent Saturday. They have no hope of seeing Jesus. They live life without comfort from His presence or direction from His wise leadership.

These are the people to whom we are sent, and they wait for someone to share the good news of Jesus with them. Will we speak or allow them to perish in the silent darkness?

Let’s spend a portion of our day in silence, remembering the quiet as a world waited and the silence of those who do not know Him. Consider life without Christ and ask ourselves:

Why do I allow the silence to persist? What should I do about it? 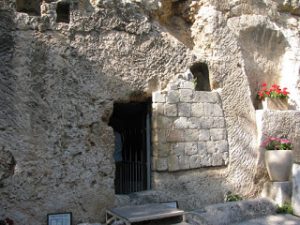 In an instant, the stone rolled away to reveal an empty tomb. Jesus was alive and the prophecy of Genesis 3:15, for which the world had waited since the Garden fall, was fulfilled. The blow Satan struck was a scratch in comparison to the head-crushing defeat Jesus dealt the evil one.

According to Isaiah, Jesus strapped on righteousness as a breastplate, clad Himself in the garment of vengeance, and wrapped Himself in zeal. He waded into our sin problem like a pent-up flood and fought until the battle was done. (Isaiah 59:15-20) Sin and death were overcome. Judgment was satisfied. Payment for sin was made.

His presence was enough.

The disciples wanted Jesus, living, breathing, and walking among them more than anything. His presence was victory enough for His followers. They savored His sweetness. Rejoiced in His nearness. Delighted in the miracle before them.

Did any of them understand the magnitude of the battle He won? The depth of redemption He bought? Did they suspect the power, wisdom, and strength they would soon receive?

Probably not. Like most of us, they lived in the moment with no thought for future generations, but Jesus knew. As He stepped forth from the tomb, time split into before and after. He emerged with healing and redemption in His holy hands. Salvation was accomplished. Power would soon appear.

Would Thomas have expressed his uncertainty if he knew his name would be maligned as a doubter two thousand years later? Would Peter have returned to fishing if he’d known he would soon restore strength to lame limbs with a word? Of course not.

The joy of His presence was enough for those who loved Him, but Jesus would not be with them for long. His death and resurrection were necessary steps in His journey back home to Heaven. Because He went, He told his disciples, they would do more, pray more, and get bigger answers than they could yet imagine. They would do greater works than He had done. Whatever they asked would be granted. The Helper, the Spirit of Truth, would come. Power would fill them.

The same resurrection power is present in us. Jesus preached the gospel, healed the sick, cast out demons, raised the dead, made blind to see and deaf to hear, and lame to walk. We, His followers, are expected to do more than He, but do we?

Eyes that see only today.

As we ponder the Easter Weekend devotionals for Resurrection Sunday, we, too, stand in the light of the resurrection with eyes that see only today. We can’t see hundreds of years from now, the generations of family to come, the history yet to unfold. If we could, would we be as nonchalant about salvation? Would we burn with passion for lost souls? Align our lives with righteousness? Share Christ with all we meet?

In Jesus, we possess the words of life and the light of the world. How dare we keep it to ourselves?

Today is a glorious day of celebration for disciples of Christ, but it is also a time for contemplation of the resurrection power in us and our willingness to step into the life Jesus rose to give us.

Let’s ask ourselves these questions:

The account of the resurrection in all four gospels:

What Does it Mean to be a Disciple Of Jesus?

When God Speaks Through the Power of Scripture