“We’re heading to Meridian,” one of the 8 Days of Hope Crisis Response team members told me last week.

“A tornado swept through one of the poorest areas of the city. There’s a lot of damage. We’re going to help.”

“How far is Meridian from here?” I asked.

“About three hours,” came the reply.

Sometimes we sacrifice to serve

Prayer walk the area. The impression was strong, but my schedule was already jam-packed. A drive time of six hours round-trip meant a prayer walk would take a full day. I mentally reviewed my schedule for the rest of the week. Two days in Memphis. A prayer brunch. Housecleaning. I’d planned to paint my hallway over the weekend. It wasn’t an instant decision. I had other things I wanted to do instead, but the impression was too strong to be denied. Prayer walk.

Finally, I spoke to a younger colleague. “I’m thinking about prayer walking the area where Crisis Response will be working. Want to go along?” She and another co-worker had never done a prayer walk before, but both wanted to go. We decided to leave at 8 am on Sunday and make a day of it.

Saturday night, I received a discouraged text message. “100% chance of rain in Meridian tomorrow.” Sam Wiley never put much stock in weather forecasts. “That’s what they say, but it ain’t written in the prayer book,” he always told me. We decided to pack rain gear and go anyway.

The rain pounded so hard I could barely see as we drove to Meridian. “Lord,” I prayed silently, “I’ve prayer walked before. It doesn’t matter to me about the rain, but these two ladies haven’t. Please be gentle.” Rain pummeled us as we raced from the car into the building where the volunteers were housed. My shoes were soaked before I reached the door a few steps away. We greeted everyone, received our instructions and directions, changed into rain boots, and headed into the downpour.

When disaster brings a miracle 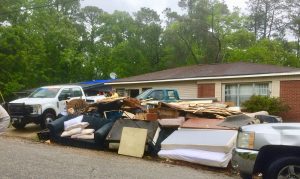 We neared the address we’d been given and saw one tarp-covered roof after another. The ground was covered with trees, branches, and debris. A few trees still perched precariously near houses. Our destination was the worst yet. A man, chainsaw in hand, stood on the roof of the house, in the rain. He sawed the last branch of an enormous tree that still leaned on the house.

Later, we learned the family was inside when the tornado hit. Their son was in his bed at the time of the tornado but rolled out of bed just before it hit. The tree fell on the house, knocked the back wall off, and impaled the bed on which he’d been lying. Exactly where he’d lain. He tells everyone he meets how God spared his life.

Miss Thelma, the owner’s sister, was in the house when we arrived. “How can we pray for you?” we asked her.

“Just pray for my sister and her health. She’s sick and not doing too well.” We prayed the biggest things we could.

After we prayed for Miss Thelma and helped the volunteer workers a few minutes, we headed out to prayer walk. The destruction was overwhelming. The streets were quiet. 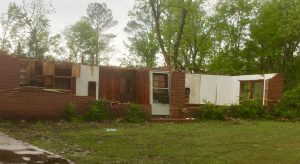 Continued rain made the task of clean-up even harder, so we prayed God would give the workers a break from it. The rain stopped. The dark sky lightened.

Drainage ditches were full of rushing water, breaking white on the rocks. I imagined what would happen if a child slipped into the water and was washed away. We prayed the water flow would slow. We rounded the corner and saw the ditch again. No whitewater at all. The flow slowed.

A couple in a truck stopped in the street to greet us. Mr. Earnest and Miss Brenda thanked us for praying and let us pray for them.

We made our way through the neighborhood and back to the first house. The volunteers held sandwiches and chips. I don’t know which of us thought of it, but we asked if they could use some water. Yes, they could, they assured us. They accepted with enthusiasm and explained their predicament. As they left headquarters that morning, they picked up sack lunches but forgot about drinks. They prayed God would send water, and He did. We left them two cases.

We were overwhelmed with a sense of deep gratitude for the blessings we enjoy. During the trip home, we discussed the things we learned:

According to the Meridian Star, the tornado damaged 180 homes and 30 businesses. Families, including many elderly men and women, have lost everything. They need your prayers and, if possible, your help.

8 Days of Hope Rapid Response is accepting volunteer assistance through Saturday, April 28th. If you’d like to help this amazing ministry, click here to learn more.

If you’d like to give hands-on assistance after that date, call the city hotline at (601) 485-1944 to learn about other opportunities for service.

The King will answer and say to them, ‘Truly I say to you, to the extent that you did it to one of these brothers of mine, even the least of them, you did it to me.'” Matthew 25:40 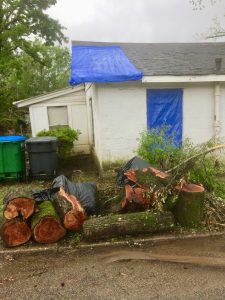 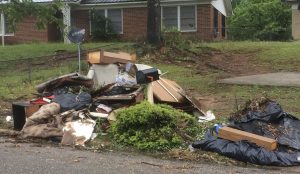 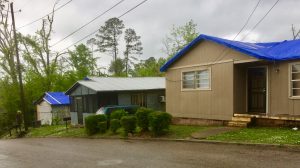 Sliding Down the Slippery Slope and How to Stop the Descent

When the Prayer of Desperation Becomes Through the Roof Prayer

If Nothing is Impossible with God Why Can’t I See It?

I’d love for you to pin and share it.